Throughout September 2021, over 110 countries took part in World Alzheimer’s Month, in the form of national campaigns, lighting of public monuments, memory walks and more.

The 2021 campaign theme, ‘Know Dementia, Know Alzheimer’s’, centred around the importance of a timely diagnosis, as well as breaking down the stigma that continues to persist around dementia and Alzheimer’s disease. As a part of the campaign, ADI also highlighted the importance of knowing the warning signs of dementia, which members widely distributed in their own respective languages.

With September 2021 marking 10 years since the first World Alzheimer’s Month, the 2021 campaign was the most successful yet. Without the hard work, determination and innovative thinking of our member associations, this would not have been possible.

Memory Walks to raise awareness around Alzheimer’s disease and dementia are a key activity of World Alzheimer’s Month.

With walks ranging from in-person to online, to half-day events to month-long excursions and done with groups of people or individually, many of our members hosted ‘Memory Walks’ throughout September.

Both the Lanka Alzheimer’s Foundation and Dementia Singapore hosted month-long virtual walks. Dementia Singapore’s virtual walk took place the first 21 days of September, ending on World Alzheimer’s Day and accumulating over 20 million steps from its participants. In Sri Lanka, the Memorable Steps campaign saw over 339 individuals and 30 teams partake in the association’s walking event, with a over 32 million steps achieved.

For the Uganda Alzheimer’s Association and Dementia Lithuania, who are currently on our Membership Development Programme (MDP), this past September was the first time either association held a memory walk!

In the last year and a half, virtual events, webinars and workshops have become fundamental to much of our members’ work and outreach.

Our members in Africa organised weekly meetings, under a series called ‘Let’s talk about dementia’,  to present what they had planned for September or were currently partaking in. The format of the meetings allowed for the associations to not only share information around events, but to also exchange advice, answer questions and overall, provide support for one another. 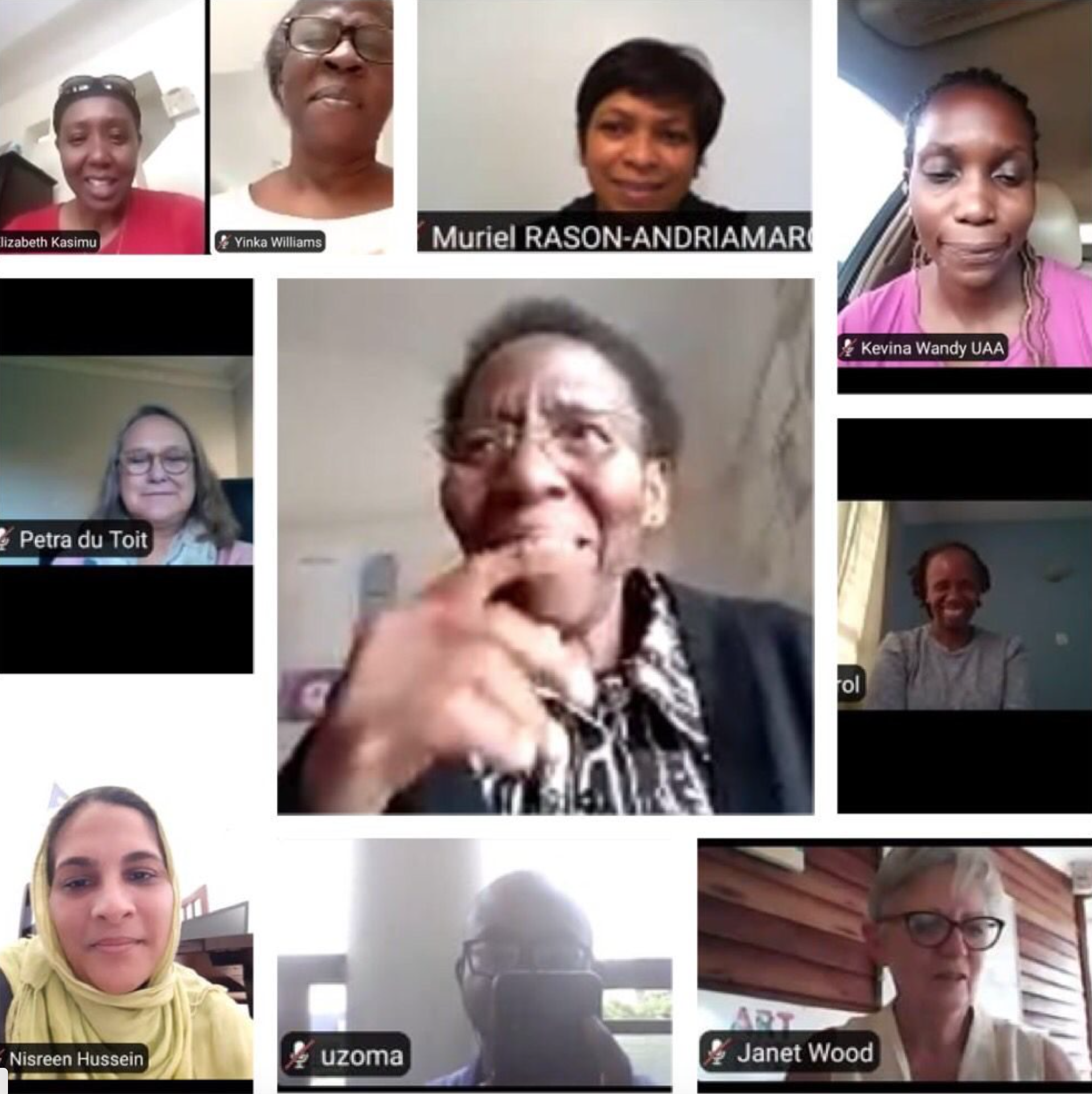 The African collaboration webinar series met once a week during World Alzheimer's Month 2021. 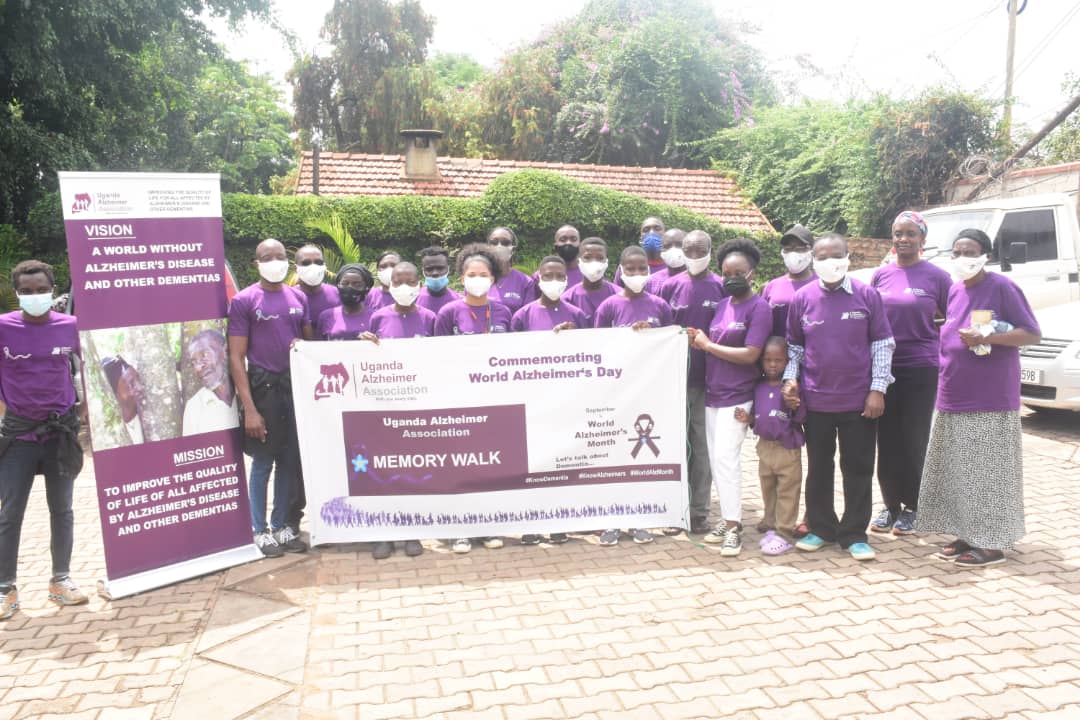 Asociación Hondureña de Alzheimer (Honduras) held an online conference to celebrate World Alzheimer’s Day, which centred around the ‘Know Dementia, Know Alzheimer’s’ theme, and included the testimony of the husband of paediatrician Ana Lina Lizardo, who has been living with dementia for 18 years. Asociacion Colombiana de Alzheimer y Otras Demencias (Colombia) also carried out a virtual and vital working group, where attendees, including Ministry of Health representatives, discussed public policy for Alzheimer’s in Colombia.

For both events, ADI CEO Paola Barbarino recorded videos of support, thanking the associations and volunteers for their tireless efforts and calling on governments to implement national dementia plans in those countries.

Watch a compilation of the buildings, landmarks and monuments that were lit up purple across Jordan through the month of September, thanks to the hard work of Al Oun For Alzheimer’s Patient Care Association.

Lighting of buildings, landmarks and monuments

Each September, buildings, landmarks and monuments light up across the sky, all over the world, in recognition of World Alzheimer’s Month.

Despite the difficulties and long-term planning that can sometimes be required to have buildings and landmarks illuminated in recognition of an awareness raising day or month, ADI members were successful in their pursuit to illuminate the skies throughout the month.

Watch a compilation of the buildings, landmarks and monuments that were lit up purple across Panama through the month of September, thanks to the hard work of AFAPADEA.

Recent years have seen the experiences of Alzheimer’s disease and dementia depicted in cinema from the perspectives of people living with dementia, carers and loved ones portrayed.

Though the world increasingly moves further in the direction of internet and social media as the go-to source for information of any kind, radio, television and press interviews continue to wield wide-reaching power when it comes to raising awareness, particularly amongst the general public.

ADI members were busy in September speaking with various members of the press, whether it was on a news segment for local television or providing interviews with the press. In Nicaragua, Dr Milton Lopez from Fundación Alzheimer de Nicaragua was featured on television, talking about activities talking place for World Alzheimer’s Month.

Elizabeth Mutunga of Alzheimer’s & Dementia Organisation Kenya (ADOK) partook in several interviews for World Alzheimer’s Month, including with international news outlets. On the BBC World Service, Elizabeth was featured in a half hour segment where she spoke about the experience of caring for her father and how it influenced her to found ADOK.

In Barbados, the youth arm of Barbados Alzheimer’s Assocation (currently on our MDP) published a special blog around Alzheimer’s disease awareness, where they talked about the importance of knowing the different stages of the disease, risk reduction activities, as well as personal testimony. 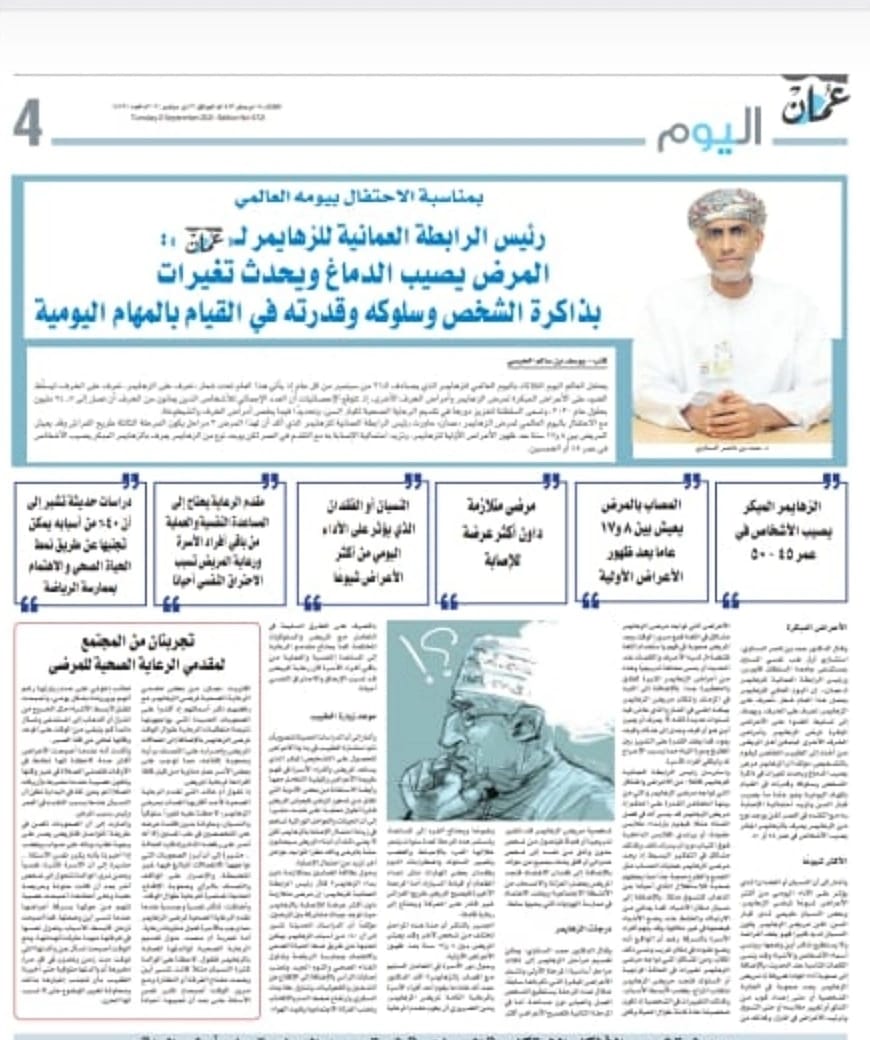 Elizabeth Mutunga of ADOK is interviewed on a local news channel for World Alzheimer's Month.

Public figures from either the enterainment industry or goverment are often involved in World Alzheimer’s Month and help to spread awareness around Alzheimer’s disease and dementia.

In Gibraltar, the Chief Minister published a video message on World Alzheimer’s Day and His Excellency The Governor of Gibraltar, Sir David Steel and His Worship the Mayor, Christian Santos, joined the The Gibraltar Alzheimer’s and Dementia Society (GADS)’s Memory Walk

In Brunei, the Minister of Health and the Minister of Youth and Social Welfare spoke at a World Alzheimer’s Day event in Bandar Seri Begawan, wearing demensia Brunei branded face masks.

In Puerto Rico, Victor Manuelle, the successful Latin Grammy nominated American salsa singer, whose father had Alzheimer’s Disease, participated in Asociación de Alzheimer y Desórdenes Relacionados de Puerto Rico’s Memory Walk. He will also be supporting the promotion of the upcoming AIB Congress, which is made up of ADI members from across Latin America.

Evert Piar from Fundashon Alzheimer Bonaire met with the Lt Governor and Commissioner of Public Health and shared the World Alzheimer Report 2021 with him; in Pakistan, Alzheimer’s Pakistan hosted their World Alzheimer’s Day activities at the President House, Islamabad. 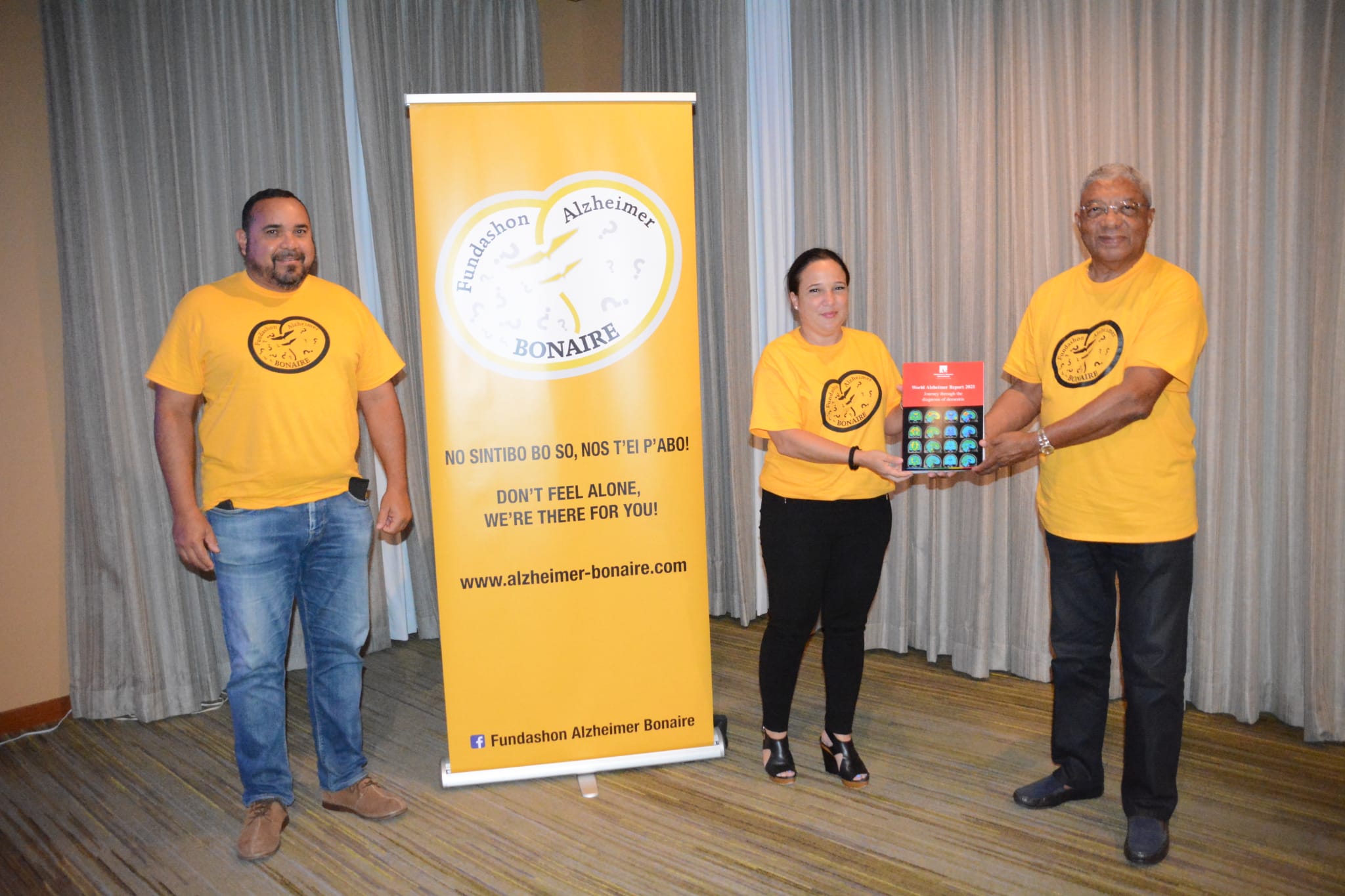 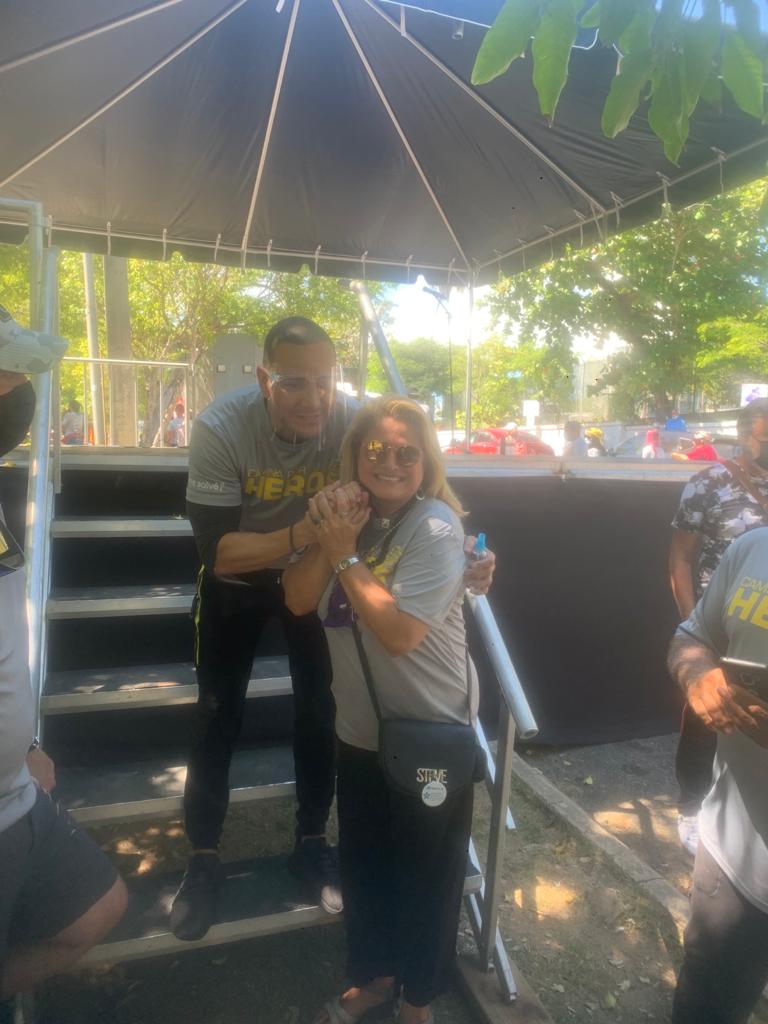