There are many factors which have been linked to the development of dementia. Some are risk factors, while others appear to be protective.

The greatest risk factor for Alzheimer’s disease and other dementias is increasing age. Although age increases risk, dementia is not a normal part of ageing.

We know there are more than 20 genes which affect a person’s risk of developing dementia. The gene APOE was the first known to increases a person’s risk of developing Alzheimer’s disease, and it is still the strongest risk gene known. There are also genes which directly cause dementia, but these deterministic genes are rare – they are estimated to account for less than 1% of dementia cases, and cause young-onset forms in which symptoms usually develop before the age of 60.

Women are more likely to develop Alzheimer’s disease than men, even accounting for the fact that women live longer on average. The reasons for this are unclear. 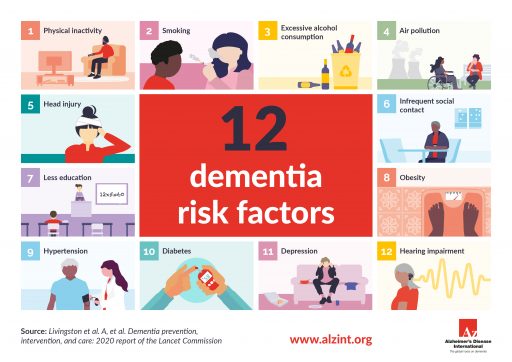 Although we can’t change our genes or stop ageing, there are changes that we can make to reduce our risk of dementia, either lifestyle changes as individuals or wider changes across society. A growing body of research evidence exists for 12 potentially modifiable risk factors. We might prevent or delay up to 40% of cases of dementia, if we were able to modify all of the risk factors.

Although behaviour change is difficult and some associations might not be causal, individuals have a huge potential to reduce their dementia risk. Many of the risk factors are also shared with other non-communicable diseases such as heart disease, cancer, diabetes and chronic respiratory diseases.

Keeping active, eating well and engaging in social activities all promote good brain health and may reduce your risk of developing dementia. Keeping your heart healthy, including by avoiding smoking and excessive alcohol consumption, can lower your risk of dementia and other diseases too.

The following is a list of risk factors for dementia along with suggestions of how to counteract them and reduce risk.

Regular physical activity is one of the best ways to reduce your risk of dementia. It’s good for your heart, circulation, weight and mental wellbeing. It is recommended that adults aim for either 150 minutes of moderate aerobic activity or 75 minutes of vigorous aerobic activity each week.

Smoking greatly increases your risk of developing dementia. You’re also increasing your risk of other conditions, including type 2 diabetes, stroke, and lung and other cancers. It’s never too late – stopping smoking later in life also reduces the risk of dementia.

A growing amount of research evidence shows that air pollution increases the risk of dementia. Policymakers should expedite improvements in air quality, particularly in areas with high air pollution.

Head injuries are most commonly caused by car, motorcycle, and bicycle accidents; military exposures; boxing, football, hockey and other sports; firearms and violent assaults; and falls. Policymakers should use public health and other policy measures to reduce head injuries.

It is well established that social connectedness reduces the risk of dementia. Social contact enhances cognitive reserve or encourages beneficial behaviours. There is not much evidence for any specific activity protecting against dementia. Joining a club or community group are good ways to stay socially active.

A low level of education in early life affects cognitive reserve and is one of the most significant risk factors for dementia. Policy should prioritise childhood education for all.

Particularly in mid-life, obesity is associated with an increased risk of dementia. Obesity is also associated with other NCDs and can generally be addressed through lifestyle changes such as diet and exercise.

Hypertension (high blood pressure) in mid-life increases a person’s risk of dementia, as well as causing other health problems. Medication for hypertension is the only known effective preventive medication for dementia.

Type 2 diabetes is a clear risk factor for development of future dementia. Whether any particular medication helps with this is unclear, but treatment of diabetes is important for other health reasons.

Depression is associated with dementia incidence. Depression is part of the prodrome of dementia (a symptom that occurs before the symptoms that are used for diagnosis). It is not clear to what extent dementia may be caused by depression or the reverse, and both may be the case. In any case, it is important to manage and treat depression because is associated with increased disability, physical illnesses and worse outcomes for people with dementia.

People with hearing loss have a significantly increased risk of dementia. Using hearing aids seems to reduce the risk. As hearing loss is one of the risk factors which affects the most people, addressing it could result in a large impact on the number of people developing dementia.

What are the early signs of dementia? Symptoms vary between Alzheimer's disease and other types of dementia but there are broad similarities between them. Read More