In the beginning of 2021, I was delighted to officially start my role as Head of Accreditation. My first introduction to working with Alzheimer’s disease and dementia began when I first became a volunteer at Alzheimer’s Indonesia in 2013. I assisted with communications and continued my support when I moved to the Netherlands in 2016. Following my move, I wanted to ensure that Indonesian migrants, either those living with dementia or carers, still had the same access to resources and support.

The ADI Accreditation programme, which was first introduced at the 34th international conference, has been an equally challenging and exciting initiative to work on during the last 12 months.

However, the perseverance and belief in what we are doing has been worth the journey so far, as on 25 January, we awarded the first organisation with ADI Accreditation to Kiang Wu Nursing College of Macau.

You might be asking yourself: what exactly is accreditation? And more specifically, what is ADI Accreditation? While we have an extensive description and outline of the programme on our website, it is something that can be difficult to grasp, even after one has read it over again and again.

In a nutshell, here is how I would describe it: ADI Accreditation works to establish and improve the care for people living with dementia and to reduce the variation in the quality of care provided, no matter where it takes place. It also intends to ensure a more focused approach to meeting people’s needs.

So essentially, the programme’s focus is to standardise and reduce the variation dementia care around the world through structured skills and approaches.

The uniqueness of ADI Accreditation comes from the fact that we make sure our accreditee is not just academically educated through comprehensive theory modules and programmes but is also practically involved with people living with dementia, person-centred care, civil society, communities and local organisations.

We also ensure that there are multi-culture approaches for international standards. Our Global Review Panel (GRP), responsible for awarding ADI Accreditation, is made up of people from a multitude of backgrounds who have a varied set of skills, knowledge and experience around people living with dementia and dementia care. 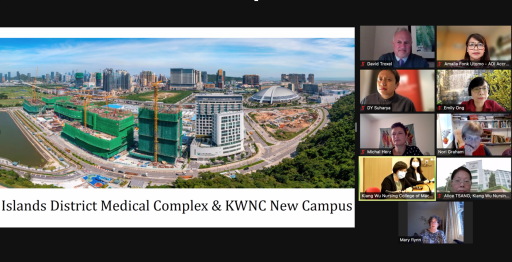 KWNC hosts a virtual tour for the Global Review Panel
.

The first pilot project for ADI Accreditation began 8 months ago with Kiang Wu Nursing College (KWNC) of Macau. If they successfully completed the programme, KWNC would be able to say that their training and learning activities had reached the required ADI standard.

While the ADI Accreditation process was first developed before any of us knew what COVID-19 was, the entire process had to be modified as a result and was conducted online. KWNC completed a comprehensive report and evaluation of their existing training programmes before we partook in a virtual campus video tour, which was then reviewed by the GRP.

The pilot project launched with several captivating discussions around external and internal governance, trainers and programme committees, students, graduates and other stakeholders. Though I had initial worries over conducting the first Accreditation process virtually, the synergy between the ADI Accreditation team, KWNC team and GRP brought a lively dynamic throughout the journey.

In the days approaching our 3-day virtual visit to KWNC, we managed to set up preparatory meetings which reviewed the rundown, list of attendees and technical online set up. We did this to ensure that everything went well during the 3-day event but also so that KWNC would be subject to the same criteria and standards as they would have been if the tour was in-person.

The online visit took place from 28-30 September and consisted of many meetings with different topics, including evaluation, carers, trainers, students, working with other organisations and people living with dementia. Through Zoom, KWNC and ADI shared information and discussed each of the topics thoroughly.

Each time KWNC came together in-person, it was done so in a socially distanced meeting room so as make sure that the virtual meeting with the GRP and ADI team would run smoothly. During each of the meetings during the 3-day virtual visit, conversations were well supported with documents and there were dynamic Q&A sessions. 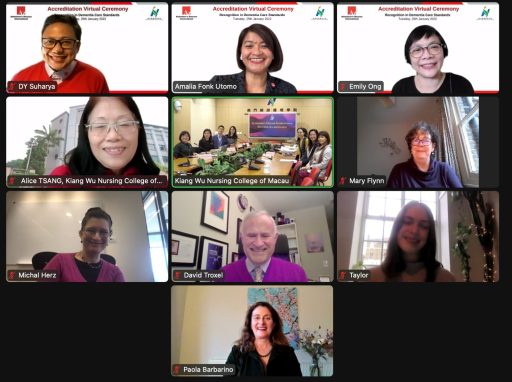 KWNC is awarded with ADI Accreditation during a virtual ceremony on 25 January.

Finally, following completion of the virtual visit and a final review by the GRP over the course of October and November, we were pleased to finally present KWNC with ADI Accreditation during a virtual ceremony on 25 January.

Professor Van Iat Kio, President of KWNC, said:During the ceremony, ADI CEO Paola Barbarino said: “While this is the first accreditation and certification of its kind, we hope that many will follow in its footsteps. Through the nursing programme, the students at Kiang Wu Nursing College will demonstrate and educate others on the importance of ADI Accreditation values and principles.”

In effect, Kiang Wu Nursing College of Macau is now able to offer training to nurses for people living with dementia and carers, which is recognised by ADI standards. At ADI, we believe that this first accreditation symbolises the beginning of a new path towards standards in dementia care, both in Macau SAR and across the world. 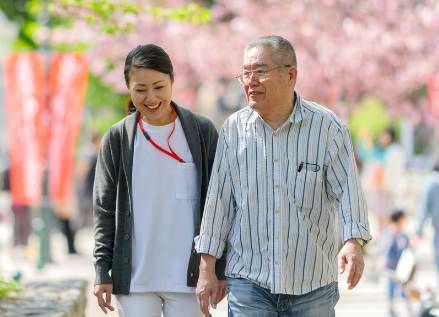 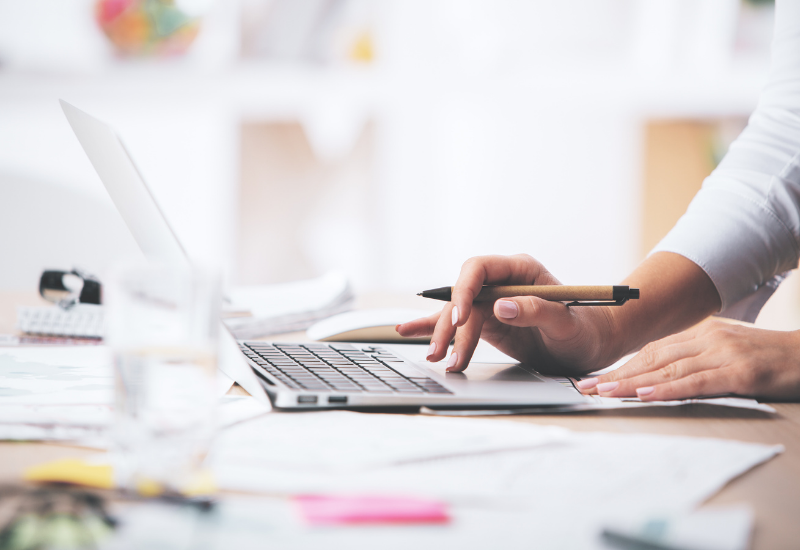