Numbers of people with dementia

Someone in the world develops dementia every 3 seconds. There are over 50 million people worldwide living with dementia in 2020. This number will almost double every 20 years, reaching 82 million in 2030 and 152 million in 2050. Much of the increase will be in developing countries. Already 60% of people with dementia live in low and middle income countries, but by 2050 this will rise to 71%. The fastest growth in the elderly population is taking place in China, India, and their south Asian and western Pacific neighbours. 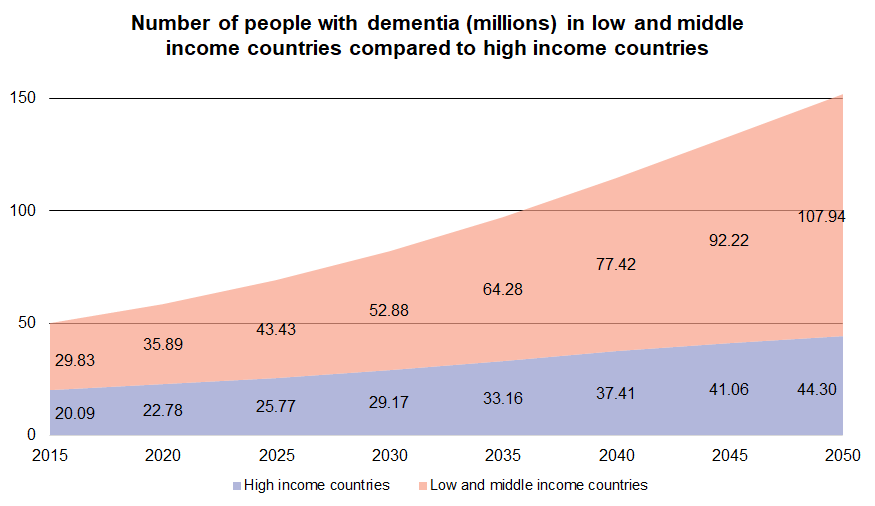 Demographic ageing is a worldwide process that shows the successes of improved health care over the last century. Many are now living longer and healthier lives and so the world population has a greater proportion of older people. Dementia mainly affects older people, although there is a growing awareness of cases that start before the age of 65.

There are over 9.9 million new cases of dementia each year worldwide, implying one new case every 3.2 seconds.

The World Alzheimer Report 2015 updates ADI’s global estimates of the prevalence, incidence and costs of dementia based on systematic reviews. The report makes key recommendations to provide a global framework for action on dementia. The report also includes a review of the evidence for and against recent trends in the prevalence and incidence of dementia over time, as well as an analysis of the broader societal impact of dementia. The numbers in the report were updated by the authors in 2017, with updated global population estimates and the inclusion of new studies.

This figure includes costs attributed to informal care (unpaid care provided by family and others), direct costs of social care (provided by community care professionals, and in residential home settings) and the direct costs of medical care (the costs of treating dementia and other conditions in primary and secondary care).

Direct medical care costs account for roughly 20% of global dementia costs, while direct social sector costs and informal care costs each account for roughly 40%. The relative contribution of informal care is greatest in the African regions and lowest in North America, Western Europe and some South American regions, while the reverse is true for social sector costs.

This means that if global dementia care were a country, it would be the 18th largest economy in the world. More information is available in our World Alzheimer Report 2015.

Research shows that most people currently living with dementia have not received a formal diagnosis. In high income countries, only 20-50% of dementia cases are recognised and documented in primary care. This ‘treatment gap’ is certainly much greater in low and middle income countries, with one study in India suggesting 90% remain undiagnosed. If these statistics are extrapolated to other countries worldwide, it suggests that approximately three quarters of people with dementia have not received a diagnosis, and therefore do not have access to treatment, care and organised support that getting a formal diagnosis can provide.

The World Alzheimer Report 2011 shows that earlier diagnosis and early intervention are important mechanisms by which the treatment gap can be closed.

Dementia is a collective name for brain syndromes which affect memory, thinking, behaviour and emotion. Dementia is the leading cause of disability and dependency among the elderly. Each person experiences dementia in their own way, but generally those affected eventually need help with all aspects of daily life. Read More