The priority of every Alzheimer’s association this century has been to achieve a greater awareness and understanding of dementia – a natural response to the negativity and myths that have been associated with dementia for centuries. There has been an assumption that greater understanding and awareness are key to tackling stigma.

A more positive way of talking about dementia has been made possible by many new insights over the last two decades. The legacy of Tom Kitwood (author and founder of the Bradford Dementia Group), and knowing that good dementia care is person-centred and based on the needs of the individual rather than the task or the organisation are examples; along with the improved evidence base for dementia reduction; the knowledge that the pathology of dementia develops in the brain decades before symptoms appear, meaning that timely diagnosis and disease modifying treatments may delay onset; and that Alzheimer’s medications have resulted in changed attitudes of doctors towards treating the symptoms of dementia. There has also been recognition of providing guidance on the language used around dementia – avoiding terms like ‘dementia sufferers’ – and in some countries a new word for dementia has been introduced to remove previous contemptuous connotations.

The thinking has been broadened beyond awareness under the banner of ‘dementia friendly’. It has taken multiple forms through:

These developments are recognised in action area 2 of the WHO Global dementia action plan on the public health response to dementia 2017-2025 in Dementia Awareness and friendliness. The rationale for action in the Global action plan is that “Increasing public awareness, acceptance and understanding of dementia and making the societal environment dementia friendly will enable people with dementia to participate in the community and maximise their autonomy through improved social participation”. The Global action plan goes onto state “A dementia friendly society possesses an accessible community environment that optimises opportunities for health, participation and security for all people, in order to ensure quality of life and dignity for people with dementia, their carers and families.

The question is how far can we rely on awareness and dementia friendliness alone to achieve a reduction in stigma and improve quality of life for people with dementia?

To reflect on the impact of dementia-friendly programmes it is necessary to think about what a good quality of life for a person with dementia might consist of. Some of the main elements that are widely recognised to contribute to quality of life are the following:

Being content, happy, feeling safe, experiencing pleasure and joy, having a sense of self-worth and purpose can all enhance a person’s quality of life. Conversely, suffering pain, distress, fear, loneliness and humiliation can all detract from the quality of one’s life.

It is hard to overstate the prominence of respect for individual autonomy or decision-making in health care contexts over the last 50 years. In cases where the necessity of substituted decision making or guardianship had been assumed, the emphasis has shifted to supported decision-making where possible, or a reliance on advance directives. Such options prioritise the values and preferences of the person affected as much as possible and assumes that doing so is at the heart of promoting a good life for each individual.

Along with autonomy, the value of equality has been equally prominent in discussions of quality of life and in medical ethics. Equality usually refers to our equal worth: despite all the differences between people – in their cognitive or physical capacities, in their ethnicity, religion, gender or sexual orientation, in their age or level of wealth and so on – we are all of equal worth. It is widely recognised that people who are routinely treated with disrespect, as inferiors, have reduced quality of life.

The impact of awareness and dementia friendliness

How effectively are dementia-friendly programmes likely to promote well-being, autonomy and equality?

People on the receiving end of stigmatised attitudes and behaviour and the related social isolation are more likely to suffer a range of poor health outcomes and have reduced capacity to secure important needs, such a health, personal care and other support services. For people with dementia this starts with under diagnosis and failure to provide post diagnostic support which both stigmatises and increases the difficulty of accessing services that respond to their individual needs and builds on their capacities. It continues with frequent physical and medical abuse in institutional care.

Insofar as awareness and dementia friendliness can play a role in reducing stigma and facilitating inclusion, they can obviously promote well-being. It is likely that people who experience positive and warm relationships and are active in their communities are more likely to report feeling satisfied with their lives, to have a sense of self esteem and purpose, and are less likely to suffer various forms of neglect. Training and education for informal carers and paid staff will also help. So, dementia friendly projects that focus on inclusion, social engagement that enables the person with dementia to continue their interests, and mentoring that enables voluntary and paid employment will have practical benefits.

Low income countries have generally not experienced the positive changes in the way dementia is talked about in high income countries. The stigma of dementia is great because of ignorance around dementia, other pressing health priorities, poor health infrastructure and cultural and spiritual factors. There is a need for information and knowledge about dementia among carers, care workers, healers and the community, in recognition of the fact that a lack of understanding of the condition fuels fear and discrimination and perpetuates negative beliefs towards those affected by the disease. In these countries stakeholder groups will require a better understanding of dementia and to adopt approaches that respond to the cultural understanding of dementia and beliefs about the causality of the condition.

However, in all countries stigma and social exclusion is rarely just a result of ignorance. This concern is closely related to a deeper issue which can be provocatively presented as a question: how many of the difficulties confronting people with dementia are just “in the head”? In other words, to what extent does the stigma and exclusion experienced by people with dementia stem from ignorance and bad attitudes, as opposed to stemming from broader social structures?

The impact of social structures on stigma is arguably pervasive and insidious. For example, a diagnosis of dementia maybe used to exclude individuals from some forms of care e.g. rehabilitation and palliative care. Conversely, the absence of a diagnosis or post diagnostic support, for the majority of those with dementia, denies them access to health services. When people are excluded from the workforce, or do not receive the right resources to maintain their independence, then the effect can be that stigma around dementia is reinforced. When people do not receive adequate assistance to live in decent housing with high quality support services, or when their own choices and decisions are not respected, then stigma is at play. And discrimination extends beyond services to research, where the priority for dementia research is clearly less than second best to what has been invested in cancer and HIV/AIDS.

In other words, we need to be modest in our expectations about how much awareness and dementia friendliness on their own can do to tackle stigma and social avoidance. In the light of serious under investment in medical research and treatment, housing and support services, and without legislative action to improve accessibility and address discrimination, stigma will persist, because it is reinforced daily.

We have much to learn here from the disability rights movement. The disability community prefers to talk about disability rights, rather than disability friendliness, an older and largely abandoned phrase. Resources, accessibility and protection from discrimination are fundamental entitlements, enshrined in the Convention on the Rights of Persons with Disabilities (CRPD), now ratified by the vast majority of the world’s countries. Their delivery is not an act of friendliness (or kindness): it is a fundamental right owed to all members of the community. Failure to secure them is now described as a failure to respect the rights of people with disability, a failure to treat them as equals and respect their dignity. The blind philosopher Adam Cureton has dubbed it ‘offensive beneficence’ when a person’s rights are offered as an act of charity, kindness or generosity.

In addition, people with disability also remind us that however well intentioned, action that does not aim at supporting their capacities to make their own decisions and manage their own lives, can do more harm than good. We can seek to be welcoming, helpful and friendly to people with disabilities, yet they may experience it as paternalistic or even condescending. Most people with disability want their relationships with others to be directed by their own views about what their needs are, as much as is possible, and based on recognising them as capable. Anything less, however well intentioned, it is often said, is to fail to treat them as equals.

While the CPRD includes dementia, and much has been made of the need to normalise dementia and refer to it as a disability, the language and emphasis of dementia friendliness is quite different to what is widely preferred in the disability rights movement. In that movement, reference to ‘special needs’ and ‘assistance’ has been replaced with ‘human rights’, ‘fairness’ and ‘opportunity’. When disability advocates talk about ‘normalising’ disability, part of what they mean to do is reject assumptions that disability is a ‘deficiency’ or even a ‘disease’, but instead a normal part of human variation.

As advocates for people with dementia, do we want to also deny that dementia is a disease, or deny that it is often experienced as a very negative development in a person’s life? Would borrowing this view from the disability rights movement do justice to the experience of people with dementia and their loved ones? There is a need for careful reflection on exactly how and why dementia advocacy can be part of the broader disability rights movement.

Awareness and dementia friendliness have a role to play in changing the way we think about dementia and achieve practical change to make societies more inclusive of people with dementia. But there is a risk that generalised notions of awareness and dementia friendliness may distract from the most important factors in ensuring a good quality of life for people with dementia and their loved ones – namely, resources and protections of various kinds: investment in diagnostic and health care resources and research, adequate income, housing, and high-quality support services, accessible environments and legal protection from discrimination, to name just a few. We should never underestimate the tendency of governments everywhere to support and prioritise solutions that shift focus away from their own responsibilities and demand less of them in terms of resources and legislative action.

Finally, we should be thinking more deeply about the relationship between dementia advocacy and the disability rights movement. 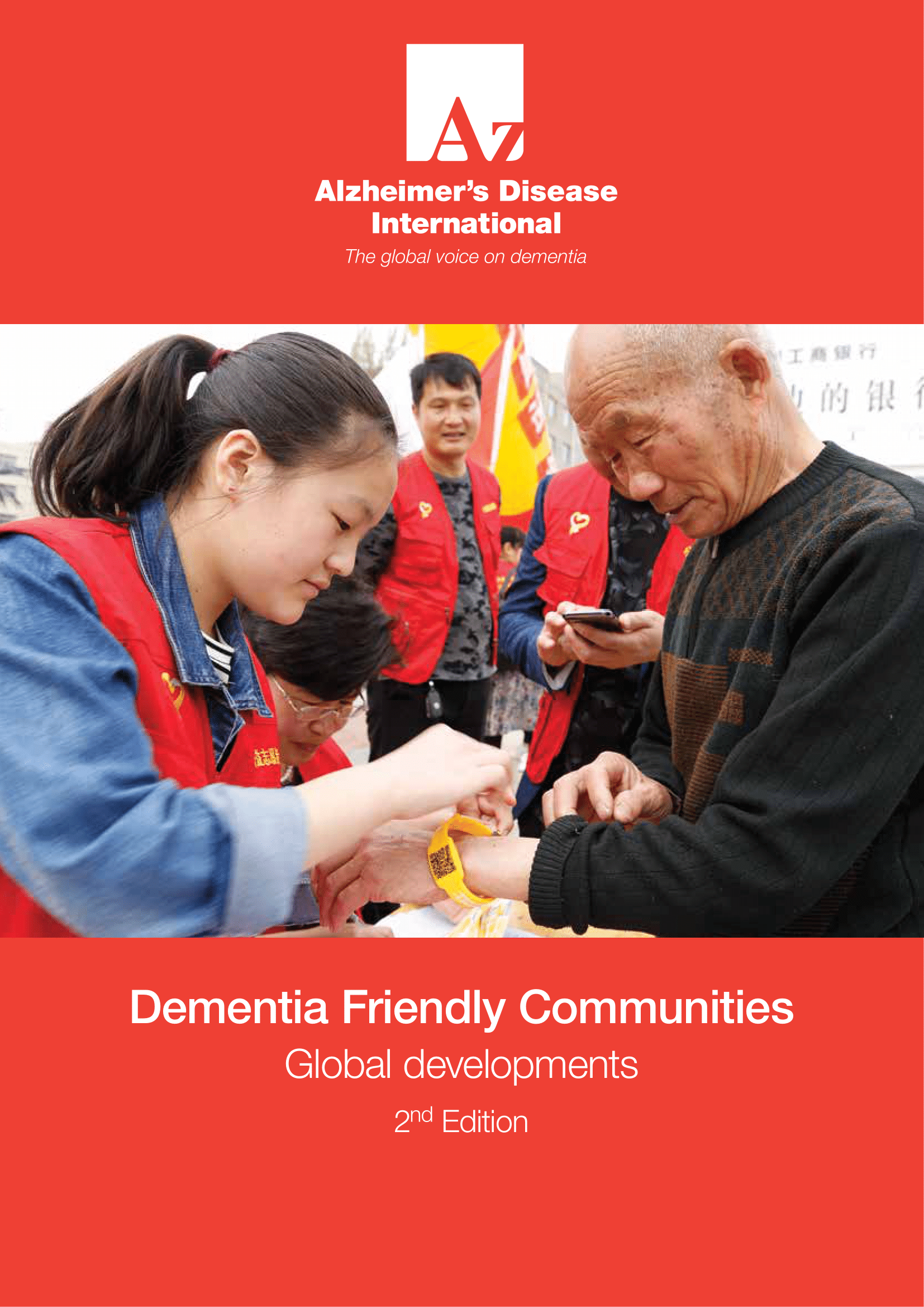